Someone gave me a cutting of lemon balm two years ago. It grows fast and spreads out, a great filler in any garden bed. When leaves are rubbed, crushed, this plant releases a refreshing lemony aroma.

Where found: herbaceous perennial, native to southern Europe, Iran, Central Asia but naturalized here in the US and elsewhere.

Garden Tips: this aromatic plant does not spread underground like mint. Stems sprout from seeds that come from inconspicuous flowers. It responds well to cutting and trimming a few times a season. Lemon Balm likes mulch too.
Most herbs like the sun but lemon balm can tolerate some shade.

3 Benefits: Why is it popular? Its been used as a flavoring in recipes, adding lemony citrus tones to meats, fish, veggies for centuries. Probably arrived here with the early settlers, as they took their food and their medicines with them. Known for its calming effect, especially when digestion is involved, lemon balm must have been soothing on long ocean voyages.

Another benefit is as a carminative. Carminative means a substance that prevents or eases gas in the alimentary tract. Also known for its calming effect. Medical Medium goes further and tells us that the balms kill viruses, bacteria and other microorganisms inside the liver. Lemon balm calms the nerves of the liver. And calms the nerves of the intestinal lining which in turn lowers toxic heat in the liver. IBS, Irritable Bowl syndrome, is a worldwide malady. Could lemon balm be a good first choice herb to calm nerves especially GI nerves in our fast-paced world? Yes, it can.  It’s also a diaphoretic which means it promotes perspiration which helps with the onset of colds. 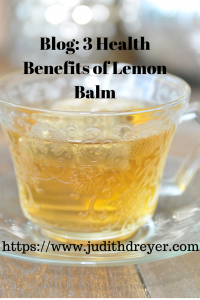 Tea: can be made with dried or fresh leaves. I make fresh lemon balm tea as its growing as I want to manage its size. Little shoots are coming up nearby so I don’t worry about having enough. I pick a handful and place fresh leaves into a half gallon of boiling water. I turn off the heat and let sit for about an hour, strain and then serve over ice.

I checked my dried herbs this morning from last years supply. I tend to mix a few herbs for winter teas. This morning I made a cup with last year’s dried supply. When I opened the jar I noticed there was little lemon aroma. The tea itself is a little stronger too, though that’s not the right word. There is a difference between the two. How about experimenting with dried versus fresh and compare. What’s the difference? Which do you prefer?
Lemon Balm, whose botanical name is connected to bees, is a lovely herb for any garden.