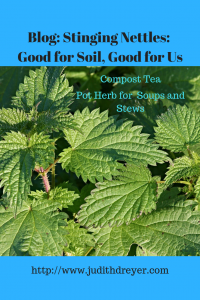 So many of my podcasts are concerned with growing good soils. Nettles pops up as a great plant, a must in fact for growing good soils and for adding nutrition to our spring diet. If you don’t have any nettles, can you think about dedicating an area just for them? A new addition that will contribute so much to your garden? Seeds are available too if you can’t find a neighboring gardener willing to share.

Nettles are one of my favorite spring herbs. Their reputation to “sting” usually makes many wary or loathe this plant. Yet they are a powerhouse of nutrients not only for the soil but for us too. In biodynamic farming, nettle is a major player in composting. Why?

Biodynamic farming, founded by Rudolph Steiner, encourages its farmers to use nettles in a preparation called BD504. “Stinging Nettle has enormous healing potential. Working in conjunction with Mars, (Steiner worked with the planets, moon cycles etc) BD504 plays a huge role in resolving soils with an imbalance of iron,  magnesium, and sulfur. Excess iron can cause many problems and often presents itself in the form of very tight soil with hardpan or crust. This tightness locks in the iron and other trace minerals, which in turn exacerbates the problem. BD504 preparation loosens the soil texture allowing the nutrients to release, disperse and be absorbed by plants.”

This plant also contains formic acid, phosphorus, and a trace of iron. The square and downy stems are covered with tiny sharp spikes that release an acrid fluid when touched much like a bee sting. Interestingly the juice of the crushed nettle leaves can be rubbed on the sting for relief. Each of these spikes or spines is composed of small cells that contain this fluid. Once dried or cooked the sting is neutralized. However once discovered and tried it makes for a nutritious pot herb or tea.

The Details:
Name: Stinging Nettles: Urtica dioca
Parts Used: the whole plant
Where Found: Nettles are found in most temperate regions and seem to follow man’s migrations. Nettles can indicate a soil rich in Nitrogen.
Young Shoots: Nettles are best gathered in the early spring when they are less than one foot tall. Later in the season they get gritty and accumulate crystals, cystoliths that make them 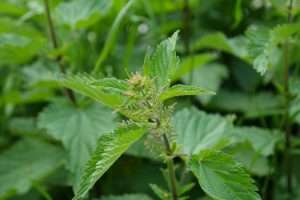 unpalatable to eat. I gather for two reasons, one to cook and eat that day, or two, to make a pot of tea with the fresh herb or two, and then dry the rest for later use including winter.
Stems: Nettles have been valued for its fiber. While in herb school we separated the fibers found using the cut and dried stems gathered late in the summer. We then wove our own cordage. This fiber was also used in clothing, sailcloth and sacking material.

Compost tea: after I gather young nettles for kitchen use, pot herb and tea making, I gather some and place in 5-gallon bucket. I cover about 3/4 full with water. I stir it frequently for about 3 weeks. At the end of three weeks, I add molasses, about a tablespoon to 1/4 cup and let it ferment a bit. When done I dilute the tea 1:10 with water. Then I give each plant a cupful. You can also dilute the tea 1:20, 1 part tea to 20 parts water and use as a foliar spray which can deter bugs and even fungi, such as powdery mildew.
At the end of the season, plants are cut back to the ground and added to the compost pile.

Recipe for nettles as a potherb and/or tea:

My podcast guest this week, Craig Floyd, manager for the Coogan Farm in Mystic CT celebrates all plants including nettles. Bright green parts poke up at the beginning of spring offering nourishment both for us and our soils, a treat after winter’s greys and browns. Nettles has been a part of my garden. I wouldn’t be without them. I encourage you to appreciate this little stinging plant more for it offers much. The sting reminds us to quiet down and approach them with respect.