Blog: 10 Facts You Need to Know About Plastic Bag Use Today. 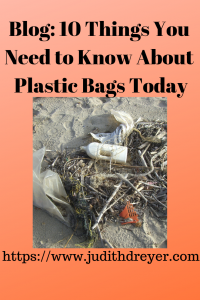 My podcast guest this week, Nate Liebenberg, from South Africa reminded me how important our recycling efforts can be. They make an impact on so many lifeforms especially those in the ocean where the effects of our use of throwaway plastics are not so readily visible. So I am reposting the efforts two University of Connecticut students contributed to creating zero plastic waste on a college campus.

Students at the University of Connecticut are making a difference one issue at a time. Over this past year, the PIRG chapter volunteers got plastic bags banned from dining services. It’s all part of UConn PIRG’s zero waste campaign. Can we make a difference by decreasing plastic bag usage? These students, 2 of whom are my podcast guests this week and next, said yes. They researched the issue, offered education, got students and faculty to sign petitions, and basically got the job done. I’m proud of them for their efforts, their enthusiasm, and their willingness to create change, one that promotes sustainability and takes care of the earth for the future.

However, I wondered about the facts around our use of plastic bags today? So, I decided to look into the issue more deeply. It’s simply astounding. And I feel saddened to think we have waited so long to take action over a serious problem that has shown us the error of our ways so graphically. Why are we taking so long to make a difference for us and all species?

Let’s look at the UK: Anna Schavorion who writes in Forbes magazine:

England’s single-plastic bag use before 2015

“The use of plastic bags in England’s supermarkets was out of control in 2014. More than 7.6 billion carrier bags were handed out to customers that year and that figure had been on the rise for the previous four years.

England was the last country in the U.K. to introduce a charge for single-use plastic bags. Wales was the first to do so, in 2011, followed by Northern Ireland in 2013 and Scotland in 2014. All saw plastic bag use decreased by 70-80% year-on-year.”

What can we do? A lot. Simply stop using plastic bags, straws and be mindful of packaging. Got your bags in the car and forgot to bring them in? I do that too. But, one student reminded me to reverse bag: put all items into your cart, take to your car and bag them there.  When I only have one or two items I tell the cashier that “zero waste is coming. No thanks, I don’t need a bag.”

Got any great ideas for zero waste? Let me know. Thanks. Judith