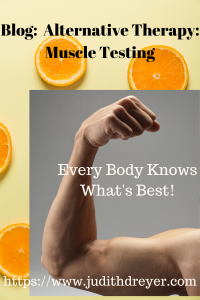 Muscle testing or Applied Kinesiology (AK) has been around for at least 50+ years. A practitioner uses muscle strength testing to determine what ails you.

I first heard about this practice through a naturopathic physician. Naturopathic physicians or ND’s are licensed here in Ct and several other states. They are recognized as valid medical physicians and are licensed to practice medicine. Where they differ is in their scope of study. They take the same anatomy, chemistry, physiology classes that MD’s do. However, homeopathy, natural medicines and more are part of their curriculum including counselling (which from personal experience typically makes them good listeners).

When my younger son was 3 and 1/2 years old I brought him to a chiropractor who then had me work with a nutritionist. We did blood testing as she suspected food allergies. He tested + for over 20 foods. Somehow that didn’t seem right to me and I sought Naturopathic Doctor who used muscle testing and foods to determine which ones could be causing problems. Seven foods tested positive, two of which we rarely ate. I decided to remove the remaining foods: milk, soy, sugar, citrus.

Hopeful, I went home and tossed white sugar out the door and learned to cook with pure apple juice sweetener, rice syrup, barley syrup and organic flours. It was a process but after a year, including bringing in his snacks to school and parties, he was much improved.

Within 72 hours of stopping milk, soy, sugar and citrus he was like a new person.  He was a typical allergy child: restless sleeper, cranky, reddish circles under his eyes, frequent colds. Three days later, he slept soundly and had a better mood. Eventually, his stamina and foundational health improved. If I had not experienced muscle testing firsthand I might still be sceptical. It worked for him and for me too.

Dr Weil offers a look at AK, muscle strength testing: “Kinesiology, also known as biomechanics, is the study of body 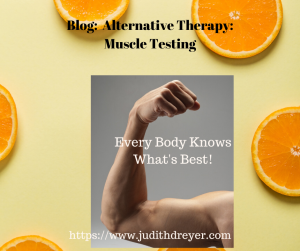 movement. Applied kinesiology (AK) which is also know as muscle strength testing, is a method of diagnosis and treatment based on the belief that various muscles are linked to particular organs and glands, and that specific muscle weakness can signal distant internal problems such as nerve damage, reduced blood supply, chemical imbalances or other organ or gland problems. Practitioners contend that by correcting this muscle weakness, you can help heal a problem in the associated internal organ”

Folks like my podcast guest, Lana Nelson and her husband, Dr Nelson, have personally experienced success with patients and clients with health issues using AK. Many Naturopathic physicians use AK in their practices. Since AK began in the chiropractic field, many chiropractors are trained in AK and use it to determine which areas on the spine to adjust to achieve positive health effects.

Have you used AK? If so I would love to hear about your health responses. Thanks. Judith